In 2014 Blackmagic made the unprecedented move of releasing its Fusion compositing software for free. That’s the same software used for years to create high-end visual effects in blockbuster movies, commercials, music videos and episodic television.

There’s just been one problem: Many people find the node-based interface of Fusion an alien concept. That was before this presentation. In just a half hour you’ll get up to speed with the fundamentals of Fusion and the chief principles of node-based compositing. By the end you’ll be able to crack open Fusion and begin creating world-class effects shots for yourself. 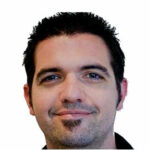 Damian Allen
Please contact us if you have any questions