How to Find your Documentary’s Story

With modern technological advances, documentary filmmakers have enjoyed greater access to more affordable tools. This webinar will show ‘how to’… 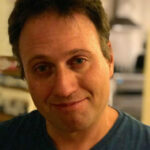 Andrew received his Masters in Film at American University in Washington DC. His first film job was immersed in the political arena, working in the media department at The White House during Bill Clinton’s presidency. A crazy but true story is that Andrew has stood in for The President and sat in the President's chair in the Oval office many, many, many times...he had to for lighting checks! With a taste for movies and the fight to go for it, Andrew moved to Los Angeles where he worked in development for top Hollywood producers, Norman Lear (who produced films such as STAND BY ME and PRINCESS BRIDE) and producer Donald De Line at Paramount Pictures on films such as DOMESTIC DISTURBANCE and THE ITALIAN JOB. Seeking a faster pace he moved to the Original Movies Division at USA Networks where he worked on many popular and critically acclaimed series including HELEN OF TROY, THE DEAD ZONE and MONK. Having read over 6,000 screenplays, Andrew left to become a script analyst where he worked for Morgan Creek Productions, Artisan and script analyst companies - Scriptshark, So You Wanna Sell a Script, The Script Department and his own company, Script Tonic. With his abundant knowledge of behind the scenes of the Hollywood system, Andrew became the US Editor of The Guerilla Film Makers Handbook US Edition (Aka The Guerilla Film Makers Hollywood Handbook). With his documentary filmmaking experience (a producer of several Docs including the soon to be released Paper Promises) and with his particular skills that were required to help shoot CAKE’s short skirt/long jacket video (nominated for MTV’s Break Thru Video) along with being a show runner for TruTv's highly successful reality show, Operation Repo, Andrew was the perfect co-author for The Guerilla Film Makers Documentary Handbook. Andrew enjoys sharing the knowledge teaching at the NY Film Academy as well as giving many lectures at schools and colleges including his own masterclasses. His number one rule which he pounds into his students, is that STORY ALWAYS COMES FIRST. Andrew writes with Genevieve on their many Hollywood projects and is a founding partner of the film company, Crazee Pictures.
Show More
Show Less