The Secret of Breakaway Props

You’ll learn how to construct a breakaway prop that won’t result in a trip to the ER for your actors. 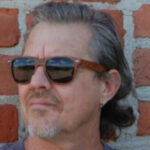