This webinar is aimed at Mac-based editors or VFX artists who have absolutely no experience with programming but would like to design their own custom plugins for Premiere Pro, Final Cut Pro, Motion or After Effects.

Award-winning editor/plugin designer Tim Dashwood will guide you through the basic steps of creating your own plugins from scratch in Apple’s Quartz Composer and then delivering them to After Effects, Premiere Pro, Motion or Final Cut Pro (7 & X) via Noise Industries FxFactory Pro.

Have no fear… we will not write a single line of code during this webinar! If you know how to patch a camera into a capture card input and then into a monitor (or likewise a guitar into an effects pedal and an amp) you will understand how to write your own plugins using node-based programming. 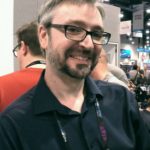 Tim Dashwood
Please contact us if you have any questions