Contrary to the perennial “tape is dead” buzz, magnetic media is alive, well and still very much a part of today’s content management. Post production workflows on every budget level still use this media format for more than just archiving. Listen in to Digital Film Tree CEO, Ramy Katrib explain where these formats are still a mainstay in workflows and why they will remain viable for some time to come.

Director of Photography, Photographer, Editor and Educator Chuck Fishbein will also be joining us for this great webinar. Chuck Fishbein has over 25 years of commercial experience. He is a specialist in the field of entertainment promotion, corporate training, urban landscape imagery, time lapse photography, still life and portraiture.

Along with his wife and Senior Producer, Sarah Fishbein, Chuck owns and operates Crazy Duck Productions, a small video production company with a very large footprint.
They love their job.

Chuck’s unique imagery of New York City is represented exclusively by Getty Images and he is currently a member of the prestigious Sony Independent Certified Expert (ICE) team. 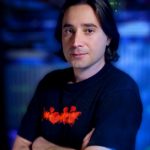