The explosion in stereo 3D movies with blockbusters like “Avatar” and “Clash of the Titans” has established this new format as a permanent fixture for the future of filmmaking. While some movies are actually photographed in stereo, others are photographed “flat” then converted to stereo in post using a process called “stereo conversion”. This is the biggest explosive growth industry in filmmaking today and one of the hottest new employment opportunities in the entire entertainment industry. Whether you are a filmmaker or a post-production artist, if you work in the film industry you need to understand how stereo conversion is done.

This webinar will walk through the stereo conversion process from shot breakdown to the massive labor-intensive job of rotoscoping right through to depth grading and stereo filming. It will be a grand tour of the entire process that will build your vocabulary of stereo terminology and an understanding of stereo post-production workflow. The actual stereo conversion will be demonstrated with Nuke, the premier VFX compositing program that has established itself as the industry standard for stereo conversion. The principles will be demonstrated in such a clear way that no prior knowledge of Nuke is required.

Also, since stereo images are being presented you will want a pair of red and blue (anaglyph) stereo glasses to enjoy them in glorious stereo. If you don’t have anaglyph glasses no worries, you will still find the webinar immensely informative. 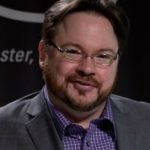 Michael Kammes
Please contact us if you have any questions